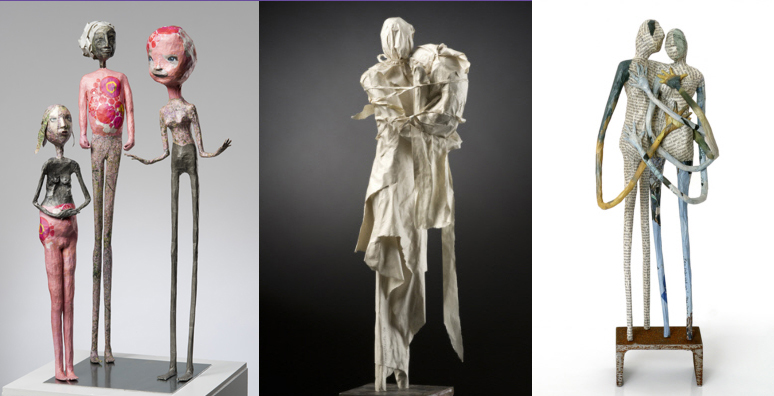 Xenia is one of these artists who take a firm stance on political and social issues. The primary subject of her art is the human race in its social environment.
For many years now she has been creating figures from newsprint. She has developed a special technique making newspapers an essential element of her artworks. So the outer layers of all her sculptures consist of original newsprint which is not painted over or otherwise modified. In 2005-2007 Xenia she worked on the Global Citizen Project in which she used 200 original newspapers from all the countries in the world thus creating 200 small paper humanlike figures. Print and images on each sculpture were deliberately chosen to show characteristics of the relevant nation. These paper figurines represent the whole world population and may serve as a symbol for the problems of globalization.
Another global challenge to be mastered is Climate Change. The artist takes this subject on in her Global Warming Art Project This is the artist's interpretation of the global climate crisis. A collection of weather charts over the past 30 years served as material for a dozen of expressive figures. In addition to these sculptures she created collages and information panels. This project has been presented - among other locations - at the Head Office of the Deutscher Wetterdienst (German Meterological Office) in Offenbach near Frankfurt. Some life-size figures are there on display in the entrance hall permanently.
Xenia Marita Riebe's The Epigonians are sculptures from newsprint symbolising future people - former earthlings - who had to leave their uninhabitable planet to live a wretched life on distant planet called Epigonia.
Also the artist made life size paper sculptures shown at the Zagreb Music Biennale (2008) as part of Oratorian Scenario Zilverstad subject of which was the genocide at Sebrenica.
In addition to these great series Xenia created quite a number of smaller paper sculptures looking into different subjects such as Greek mythology, German history, social aspects but also figures that show a good sense of humour.

Global Network first shown in 2009 is an installation that again has globalization as a primary subject.

The vast arc spanning the subjects shown in her paintings reaches from the origin of mankind over social developments to living in today’s world of technology and science as shown in her cycle African Rock Painting and Modern Technology.
Particularly there is a focus on ethical values in the discussions about the limits of which is achievable by manhood and what is ethically justifiable shown in her paintings about reproductive cloning as well as the effects of globalization shown in her series "White Strangers" - Here the migrants frozen in social frostiness and there people growing closer together thus showing some hope for a better future

Since 2010 Xenia Marita Riebe is co-editor of DER OBSIDIAN an international journal for art and literature.